Located in the centre of Hà Nội, Đồng Xuân Market has become an iconic landmark that has witnessed many ups and downs of the 1,000-year-old capital.

The architecture of the market is known for its tropical features, though it was designed and constructed by the French in 1889 when they embarked on exploiting Indochina colonies.

Specifically, the two-layer corrugated iron roof of the building aims to aid ventilation and release heat. Initially, the market had a total area of about 6,500m2 including a complex of five adjacent houses. The façade of the market consists of five big entrances featuring French-style doors, and the whole building is sheltered by air-gap walls that maximise ventilation and absorb natural light. 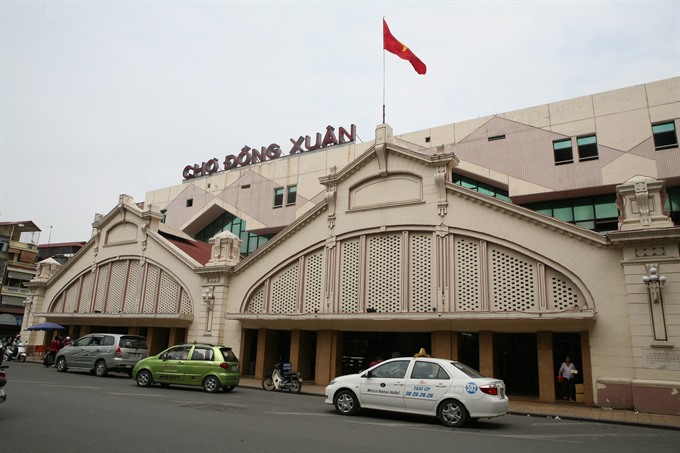 Trading hub: The architecture of Đồng Xuân market in the heart of Hà Nội is known for its tropical features, though it was designed and constructed by the French in 1889 when they embarked on exploiting Indochina colonies. (VNS photo Trương Vị)

Additionally, according to architect Đào Ngọc Nghiêm, vice chairman of the Hà Nội Association for Urban Planning and Development, the French skillfully designed the dome of the market similar to the entrance of the Imperial Citadel of Thăng Long, which combined with French-style architecture to create a special building.

The architecture of the market reveals that its designer aimed to create a typical market for a tropical area, seeking harmony between French and indigenous culture in the late 19th and early 20th centuries.

It was also one of the first examples of how Vietnamese architectural elements were integrated into French-style buildings in the city. 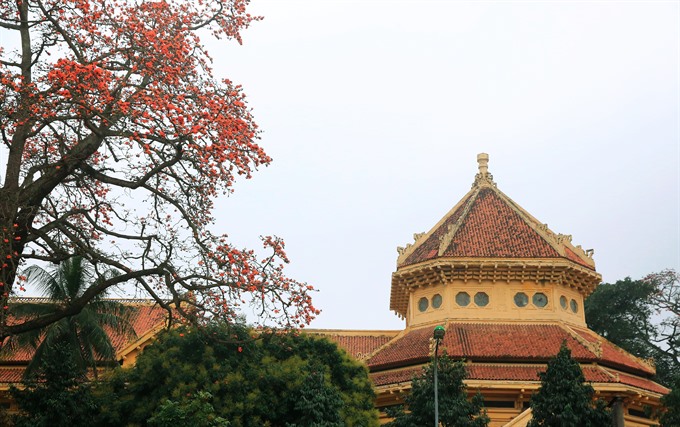 The French colonists first came to Việt Nam in the late 19th century. In 1886, the French in Hà Nội established the municipal council with the aim of "turning Hà Nội into a European city".

Over a history of more than 100 years in Việt Nam, and Hà Nội in particular, the French left a valuable, unique and advanced heritage of their architecture and structures in Hà Nội.

Before French colonialism, Hà Nội had three major components: the imperial citadel, commercial zone (the Old Quarter which featured streets on which a number of crafts and merchandise were sold) and the surrounding rural area.

Hà Nội at that time was considered the administrative centre of the whole Indochina. The city planning that French architects brought to Hà Nội gave it a new face.

Hà Nội, with mud-walled cottages, was transformed into a more organised, orderly city which featured both traditional tube houses in the Old Quarter, elegant houses and villas for the French living in Hà Nội and well off native merchants, the chessboard streets, tree-lined boulevards, entertainment structures imported from France as well as the advanced system of drainage, planned grid network of streets and parks, and public spaces for the community. 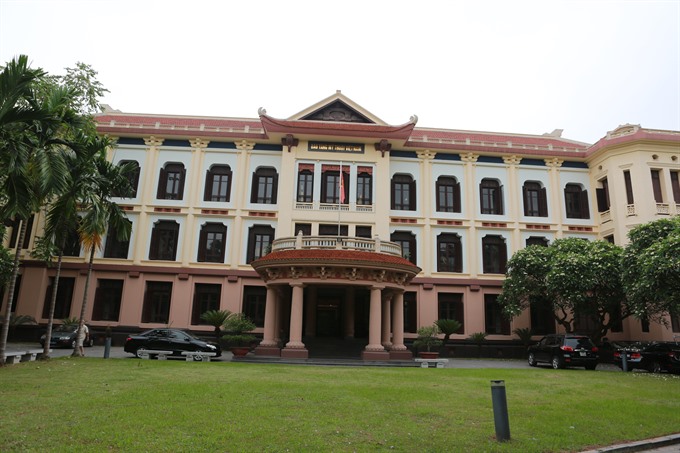 Home of art: The curved corners of the roofs, a typical Vietnamese design, can be seen at the Vietnam National Museum of Fine Arts, a construction by the French in the 1930s. (VNS photo Trương Vị)

The French buildings and structures in Hà Nội belong to various styles – neo-classical, Indochina style, art deco – yet the finest and most important would be Indochina style. It is a fusion of modern and traditional architectural elements, of French and Vietnamese style that brought structures into harmony with the townscape as well as the tropical climate of Hà Nội.

“When the French arrived in Việt Nam, they were impressed with the local architecture that was both beautiful and suitable to local culture, climate and scenery. In the second phase, after the First World War, more Vietnamese or Oriental elements were integrated into the structures to create a new architectural style, or Indochina style,” says architect Trần Quốc Bảo, a lecturer at the National University of Civil Engineering and also a member of the Group of Researchers on Architecture of Hà Nội.

In the mid-1920s, a series of buildings were constructed in the Indochina style. The leading architect of this style, later on known as Indochina-style architecture, was E. Hébrard from France. After years of working in Indochina, he held a special interest in the indigenous culture and created many building projects in both Hà Nội and Đà Lạt in the Central Highlands province of Lâm Đồng.

The representative buildings for this architectural style in Hà Nội include the l’Université d’Indochine, Louis Finot Museum, Direction des Finances, Church of Martyrs and Institut Pasteur.

What is interesting about such buildings is that their interiors are totally in the French style and operate like any French buildings, but they are sheltered by Vietnamese-style structures. 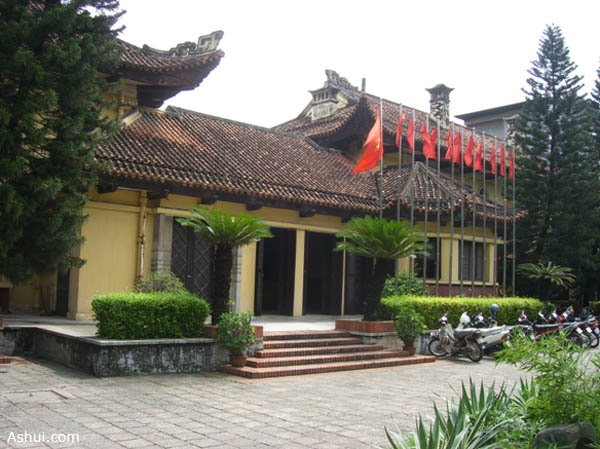 Complementing nature: The most popular Vietnamese features that could be found in Indochina-style buildings include the heat-proof roof, the system of light and ventilation, in addition to the maximum use of trees. (Photo ashui.com)

Classic design: The l’Université d’Indochine (University of Indochina) is a charateristic building of Indochina architectural style. Over a history of more than 100 years in Hà Nội, the French left a valuable, unique and advanced heritage of their architecture and structures in Hà Nội. (Photo ashui.com) 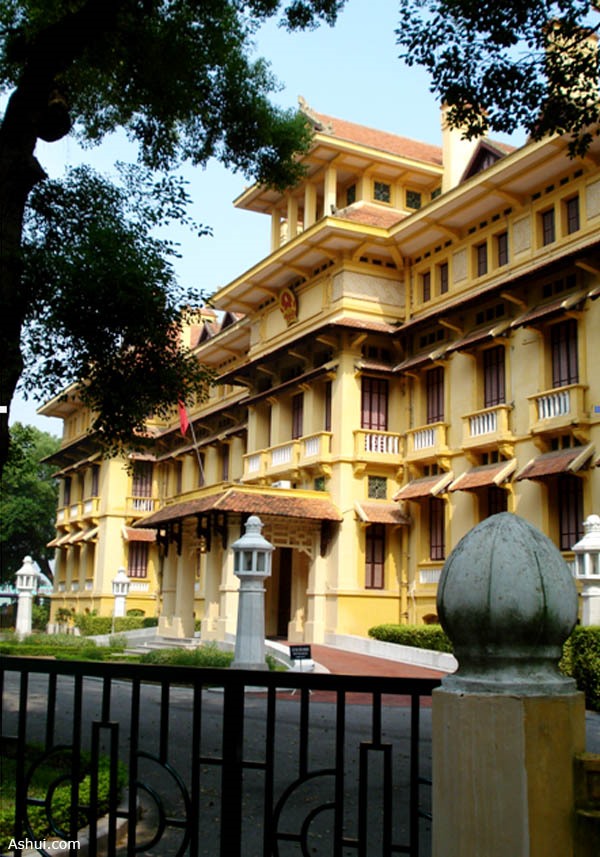 Still in use: Direction des Finances, designed by French architect E. Hébrard in 1924, has become the head office of the Ministry of Foreign Affairs. (Photo ashui.com)

The most popular Vietnamese features that could be found in Indochina-style buildings include the heat-proof roof, steep porch sheltering the buildings from rain and sun, the system of light and ventilation, in additional to the maximum use of shady trees.

In many Indochina-style villas, the tiled roofs contain many layers. The corners of the roofs are curved up and decorated with typical Vietnamese patterns like dragons, while the houses might be decorated with relief figures inspired by Oriental art.

According to architect Nghiêm, the Indochina-style buildings and structures in Hà Nội are an important heritage, reflecting the creative application of French architectural solutions in Việt Nam’s natural and cultural conditions.

Additionally, the bamboo or cloth curtain used in Vietnamese houses at the time was replaced by glass windows though which sunlight could still be absorbed to avoid the heat of Hà Nội.

“The Indochina-style structure is an important symbol of integration, yet not losing the identity of Việt Nam,” says Nghiêm.

According to architect Bảo, there are nine public Indochina-style mansions and condos, which also now serve as public buildings, in good condition in the capital.

“Most of the public buildings are used similarly to their original functions. For example, the l’Université d’Indochine is now the location of Việt Nam National University, Louis Finot Museum has been used as the National Museum of Vietnamese History, and the Direction des Finances has become the head office of the Ministry of Foreign Affairs.

Two major villas, on 36 Trần Phú Street and 4 Lý Nam Đế, have been transformed into public buildings, but their space is still well preserved,” he says.

According to a recent survey, there are around 1,600 French-style villas in the capital, among which over 500 villas are privately-owned and over 1,000 others are state-owned.

“The restoration and renewal of the French-style public buildings has been conducted methodologically, leaving barely any changes to their original states. Some privately-owned villas and condos; on the other hands, are suffering from severe deterioration,” he says.

The project developed a list of criteria to evaluate the value of French houses in Hà Nội.

“It is important that experts carefully evaluate the current state as well as cultural, historical and architectural value of the structures and classify them to put them in the order of preservation priority,” says Nghiêm.

“We do not have sufficient budget for the preservation of all structures. We need to conduct surveys to find the current state of these structures, carefully evaluate them and include the most valuable and characteristic in the list of strict conservation. The authorities should work out a detailed policy and instructions for this and listing must be based on very careful surveys and research.

“What is more important is that the structures shouldn’t be treated as a relic but a ‘living’ structure with functions and values still maintained and continued today,” says Nghiêm.

"We can learn from the conservation experience of other countries, for example Italy, Singapore or Thailand. There may be hundreds of ancient valuable houses but only a few are listed among the structures put under strict conservation schemes."

Rapid urban development poses some challenges in conserving the city’s heritage. Hà Nội has yet to develop a plan and specific solutions for such conservation. We should also tap the role of the community in conservation. There must be an agreement between experts and the community.

“We need to call for sponsors as well as owners to join in conservation work. The proceeds from tourism activities will be shared with owners and sponsors. Privatisation is a practical solution as we can hardly rely on the state budget for conservation work,” Nghiêm adds.

Besides the preservation efforts of high-value French-style buildings in the capital, the architectural experts have also raised concerns about the mass construction of new buildings with French inspiration, which however, due to improper study of design, lack architectural authenticity.