Việt Nam and France have agreed to work together in urban development and building smart cities, with a focus on exchange of information and expertise in the fields, an official said at a Việt Nam-France Smart and Sustainable City Cooperation Forum held yesterday in HCM City.

Trần Vĩnh Tuyến, Vice Chairman of the city People’s Committee, noted that the two countries were celebrating 45 years of diplomatic relations and the fifth anniversary of a strategic partnership between Việt Nam and France.

“Both countries will work to develop a strategic framework to seek opportunities in smart and sustainable city development in both countries,” he said. 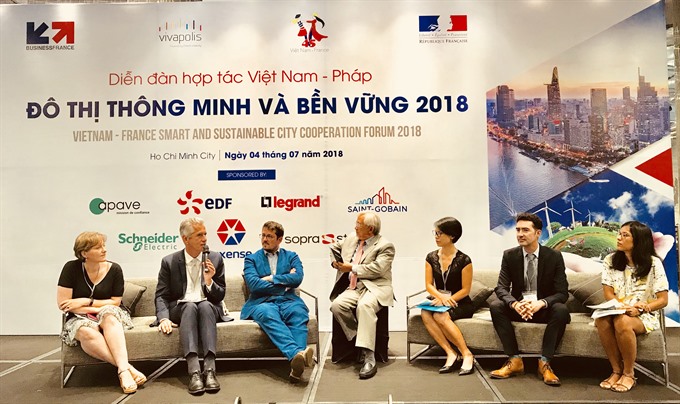 During the event, a Memorandum of Understanding (MoU) on management of air quality was signed between the city and the French Consulate.

The agreement is expected to help HCM City enhance its capacity to tackle air pollution, contributing to making the city a “green, smart and sustainable city.”

Under the MoU, both sides will cooperate in research and technology transfer to develop a programme to manage air quality and air pollution caused by traffic activities, as well as to cope with climate change.

The city’s smart city plan by 2020 with a vision to 2030 aims to build an e-Government, improve the quality of life for citizens, and improve the business environment to attract more investment, according to Tuyến.

He said the ambitious plan would require co-operation among municipal decision-makers, the private sector and citizens, as well as expertise from overseas.

Việt Nam is witnessing a rapid urbanisation rate of 37.5 per cent nationwide, posing challenges for the city in urban management.

While Việt Nam is experiencing impressive economic growth (with average annual GDP growth reaching above 6 per cent, with urban growth reaching 3.2 per cent per year), the country is among five countries most affected by climate change.

Smart and sustainable urban development is a key challenge that Việt Nam would have to address in the coming years, experts said.

He said French and Vietnamese cities would promote partnership in the field of sustainable development. “We will cooperate more in transportation, housing, water supply and water treatment.”

“I have met with the city leader who shared with me their desire to cooperate with France and French companies in the fields of smart cities, intelligent transport system, anti-flooding solutions, underground space planning and innovative construction materials,” he told the media.

“The HCM City Smart City Initiative 2017-20 is a good opportunity for our two countries. France has the technological solutions and successful projects around the world to share with the city to build a smart city.”

Experts from both countries also discussed successful case studies of smart cities in France, as well as green building and smart construction.

The seminar, held by Business France under the French Trade Commission, was attended by HCM City leaders and some 30 representatives from the French government, public agencies and companies.

Today and tomorrow the French delegation will meet with Hà Nội People’ Committee leaders and ministries as well as businesses in northern provinces to discuss cooperation projects.