The Trung Nam Group and authorities of the central province of Ninh Thuan on April 16 inaugurated a complex of solar and wind farms, which is the largest of its kind in Southeast Asia as it covers an area of 900 hectares and is expected to produce nearly one quadrillion kilowatt hours of electricity per year.

The project, invested in by the Trung Nam Group, is located in Thuan Bac District. With the completion of the wind farm, together with a solar power plant, which had been inaugurated earlier, the complex now has a total capacity of over 350 megawatt peak, Tuoi Tre Online newspaper reported.

The project will make Ninh Thuan a renewable energy hub of the country. 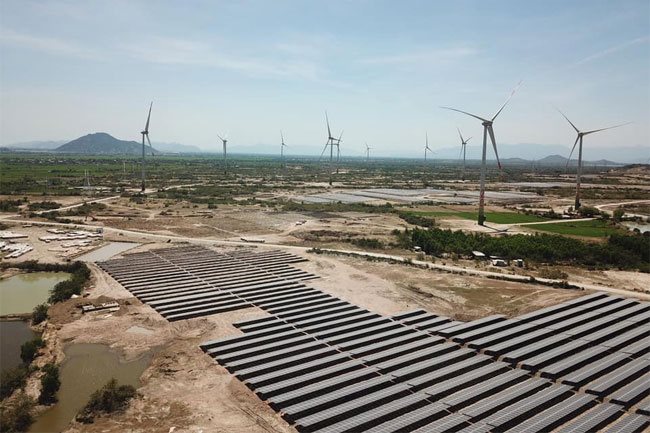 A view of Trung Nam Group’s solar and wind power complex in Ninh Thuan Province. The project is the largest of its kind in Southeast Asia (Photo: Trung Nam Group)

The province holds great potential to develop wind power with 14 areas covering an area of 8,000 hectares, mainly in Ninh Phuoc, Thuan Nam and Thuan Bac districts. The number of storms affecting the province is small and the wind volume is stable during the year, ensuring the operation of wind turbines.

Moreover, Ninh Thuan annually has a total of 2837.8 sunny hours on average, the highest among localities in Vietnam, facilitating the generation of solar power.

According to Trung Nam Group, to develop a wind power project, investors must spend a lot of time, use a high number of laborers and apply many modern technologies as these projects tend to be located in areas with a severe climate and rough terrain.