Nearly 70 per of the ancient relics in the Thang Long-Ha Noi are seriously damaged, and have been partly overtaken by residents and agencies. However, it's impossible to preserve them because of a lack of legal tools and investments, says Nong Van Thanh, officer of the Ha Noi Relics and Beauty Spots Management Board. 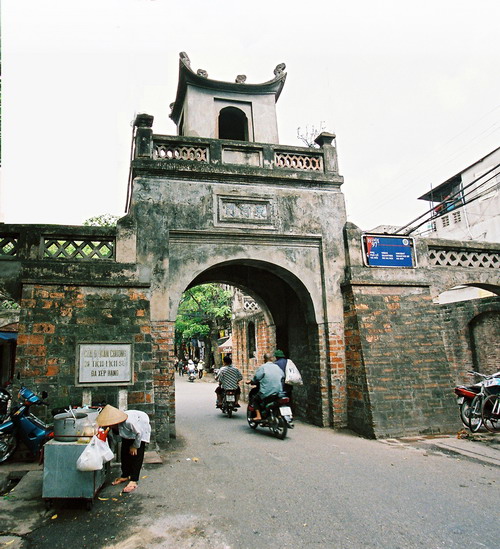 O Quan Chuong is one of Hanoi's streets in need of preservation.

There haven't been any specific names for crimes of infringing upon cultural and historical relics. Therefore punishments for these crimes have not been regulated, specifically in regards to criminal law, says Nguyen Ba Bo, a judge of the Central Military Court.

It is difficult to determine punishments, says Bo.

Even under the Law on Cultural Heritage, only three articles defined the punishment of such crimes. However, none told exactly which punishment the violators would receive or how to implement them.

"Nothing is specific and clear here," says Bo.

However, until now, these regulations were still on the table.

We cannot manage cultural and historical relics without any legal tools, said Thanh.

Not to mention that under other regulations, only pagodas and temples which have been officially ranked as national relics will have the chance to be protected and preserved.

Also under these regulations, the pagodas and temples are only ranked if there are no households or agencies living or working in them.

"It is ridiculous, because without investments from the committee, how can we remove them from these pagodas and temples so that they can be ranked," says Thanh.

Until now only 570 of 1,900 cultural and historical relics have been ranked as national projects.

Hundreds of square metres of Kim Ngan Temple, built in 1811 at No 52 Hang Bac Street, which used to be a solemn place to worship the ancestor of silver jewelry in Hanoi, a traditional handicraft in Vietnam, have now been turned into a residential area with 26 households.

Nothing remains but a small area of 30sq.m with one picture of the ancestor as a memorial, says Pham Huynh Long on Hang Bac Street.

Nguyen Viet Chuc, former director of the Ha Noi Culture, Sports and Tourism Department, says that some temples have been completely ruined and are now gone forever.

Boc Pagoda in Dong Da District is in such disrepair because it has been 26 years since the Ha Noi People's Committee asked the co-operative of Boc Pagoda Traditional Medicine to hand over the land area of 2,000sq.m, which belonged to the relic area of Boc Pagoda.

The main reason for the invasion is that they moved to Hanoi from the countryside and have no other place to live.

"We have no choice but to live in this tomb. If we are given another place to live, we will move," says 70-year-old Tran Thi Lieu, whose children and grandchildren have lived with her in Hoang Cao Khai Imperial Tomb in Dong Da District for many years.

"I don't understand why national relics have been invaded so bluntly, and why relevant agencies have no solutions for the problem" says Tran Ngoc The; a resident on Boc Pagoda Street.

They have stolen the pagoda's land to live and work there, which is unacceptable, says The.

Even worse, when the relics were invaded, antiques without protection were lost as well, says Thanh.

According to Hoan Kiem District's People's Committee, the Old Quarter, with a total area of 100ha in 10 communes across the district, is also in a state of disrepair, with 80 per cent being seriously ruined and in need of preservation.

According to experts at a conference held by the Relics Preservation Institute and Urban Solutions Company, the old streets in the 20th century were regarded as beautiful designs and alive with people. However, they have been badly altered, with too many people being crammed into them.

Sometimes more than 50 households share one home with several rooms and only three restrooms. When I think about this, I don't know what would become of our old streets, says 55-year-old Hanoian Nguyen Trung Truc.

Disorderly structures made by residents repairing their homes have caused the situation to deteriorate even further, says Pham Tuan Long, deputy head of Hoan Kiem District's Old Quarter Management Board.

"We cannot preserve and embellish the old streets, because if we do that, we will have to remove one third of the residents living there," says Long.

No one would want to move away from here, where their businesses run smoothly, even if they were given other land, says Long.

"Our business has run smoothly and we have lived here for a long time. There is no reason to move from here," says Luong Kim Hoa on Hang Ma Street.

Hanoi's People's Committee has just asked the leaders of localities to accomplish their projects of removing 1,200 households and agencies from pagodas and temples in the city by the end of the year.

However, even while waiting to be preserved, the temples and pagodas in this 1,000-year-old city continue to be degraded and encroached upon.