According to Knight Frank Vietnam, a lack of liquidity and difficulties in obtaining credit from the financial institutions continue to be the major hurdles for potential home buyers and developers. 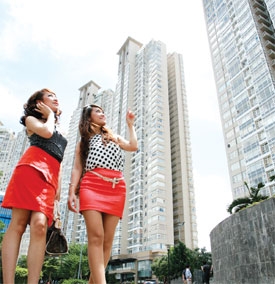 The limited credit to the real estate sector has continued to hinder development activity and has culminated in the banks with available funds, generally only providing credit to well located, high quality projects, according to Knight Frank Vietnam office in Ho Chi Minh City.

Regarding apartment segment, Knight Frank Vietnam said the market had not witnessed any significant changes through the second quarter of 2012. The absorption rates of projects continue to be slow in the recent difficult times.

“One of the main reasons is the information reported on decreasing selling prices affected the buyers’ psychology and has culminated in an increased waiting periods to enter the market,’ according to Knight Frank Vietnam’s latest quarterly report.

CBRE reported that improved macroeconomic fundamentals have finally seen residential buyers begin to explore the market for opportunities but there was not a notable increase in transactional volumes.

However, transactions of smaller sized units were popular.

“Moreover, recently developers have utilised the decrease of deposit rates and lending rates of the State Bank, by launching the affordable products and offering attractive promotions. As a result, some affordable apartment projects have still attracted some customers in the market,” the Knight Frank report stated.

According to Marc Townsend, managing director of CBRE, macroeconomic fundamentals were moving in the right direction, whilst unit pricing appears to be stabilising.

“Both CBRE and our clients have spent money on sales events in the second quarter and we have been positively encouraged by the turnout. It seems that buyers have finally stopped hiding and are now scouring the opportunities that present themselves. We are now seeing buyers looking, but not touching. We expect this increase in enquiries to translate into an uptick in sale around the turn of the year,” Townsend said.

The secondary market continues to witness sharp decreases in selling prices at approximately 15 to 20 per cent compared to the price signed in the contract with developers based on Knight Frank recorded transactions. In some cases, the secondary price has fallen up to 30 per cent if the buyers have paid at least 90 per cent of the total apartment value./.