Recent research has suggested that urban development in the floodplain of the Ha Thanh River in Binh Dinh province increased the severity of a historical flood in 2009 that killed 7 people and caused $22 million in damage in Quy Nhon City alone.

The research, carried out by Dr. Michael DiGregorio and Mr. Huynh Cao Van, was commissioned by Binh Dinh province’s Climate Change Coordination Office as part of a larger project on hydrology and urbanization.  “The goal of this project,” says Dinh Van Tien, director of the office and vice director of Binh Dinh DONRE, “is to assess the potential impacts of climate change on Nhon Binh ward and begin to make recommendations on how urban planning can be used to adapt to future climate risks. Mr. Tien noted that the Institute of Meteorology, Hydrology and Environment has forecast that climate change will produce more intense and more frequent storms in Central Vietnam. “For this reason, we decided that the best way to assess our resilience to climate change was to examine the causes and impacts of one recent historical flood.”

The Quy Nhon research is being presented at a meeting of the Urban Climate Resilience Community of Practice in Da Nang on 25 July 2012.  The Vietnam Urban Forum, under the Ministry of Construction, is hosting the meeting.  The Quy Nhon case is one of several recent studies by climate adaptation researchers that highlights the relationship between poorly planned urban development, climate change, and flood risk.  Also presenting at the workshop is Dr. Paul Chamniern of the Thailand Environmental Institute.  Dr. Chamniern will share experiences from the 2011 flood in Bangkok.

"We know that climate change is a serious threat to people's lives and livelihoods in Vietnam," said Dr. DiGregorio.  "But many of the climate related problems we are now facing are becoming worse due to construction of infrastructure, new urban areas, and industrial zones in inappropriate locations.”

By combining interviews with local residents with satellite images, researchers commissioned by the CCCO mapped the evolution of the 2009 flood within the lower Ha Thanh River.  They applied findings from this study to evaluate the city’s water management and flood protection system, assess the impacts of recent changes in the landscape, and assess the suitability of the city's current Master Plan. 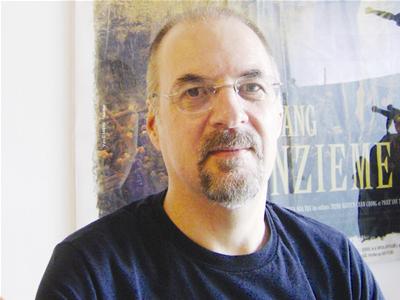 They found that residents of settlements in the floodplain anticipate and prepare for seasonal flooding. “It’s a law of nature,” says Dr. DiGregorio (photo), quoting Mr. Tran Van Tri, a farmer in Luat Le.  When there were few barriers like roads and new urban areas in the floodplain, floodwater discharged into Thi Nai lagoon quickly.  “Our most important research finding,” continues Dr. DiGregorio, “is something farmers in the lower Ha Thanh have known for centuries: Anything that blocks the flow of water into Thi Nai Lagoon increases flooding.”    In 2009, floodwater backed-up behind barriers like roads and dikes rather than spreading out evenly across the land and into the lagoon.  “We have to respect the experience of people who have lived in this area their whole lives,” says Dr. DiGregorio, “because evidence from the 2009 flood suggests they are right.”  Less than 200 meters outside the eastern dike, in the flat and relatively open area near Thi Nai lagoon, the flood level dropped by half.  By the time floodwater reached the shores of the lagoon at Hung Thanh gate, it was only 40 cm deep.

"This case study points to problems in many other Vietnamese cities," says [representative of ISET goes here].   "The problem is that even if you try to protect these areas with dykes, you will only displace the flood water and transfer risk to another area."