High rise spats set to be a thing of the past

Hanoi People’s Committee last week told the Ministry of Construction said that the current fees fixed fees ranging from VND2,400 to VND4,000 ($0.11 to $0.19) per square metre per month were unreasonable.

“Since there is a variety of services and quality levels in apartment buildings the fees applied are not appropriate with reality,” said the committee. 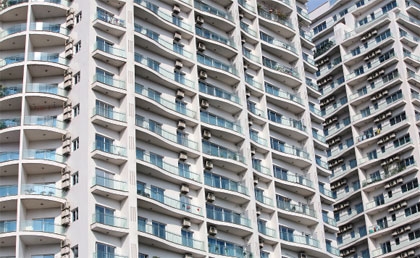 Moreover, the committee said relations between building developers and residents was a civil matter than did not need government regulations, which had often sparked conflict between parties.

“These conflicts caused bad impacts on buildings, owners and residents as well also headache for management bodies,” the committee said.

The fees would depend on the real market. Accordingly, the committee will release the estimated fee applied for each type of high-rise apartment building. Developers and residents should base on these fees to negotiate and define which fees their buildings should be applied.

Hanoi’s fixed service fees were approved by the committee since September 2011. Accordingly, the lowest fee of VND2,400 per square metre per month was applied for buildings which do not have a lift. For other buildings the fees were posted as VND4,000 as highest level, including fees for services, management, developers’ benefit and VAT.

However, those fees brought disputes between the developers and residents of many high-rise apartment buildings.

For example Keangnam Vina, developer and manager of the highest building so far in Vietnam, imposed to collect fees of VND17,000 ($0.8) per square metre per month. However, its residents refused to pay, claiming that the fees was much more higher than those regulated by the Hanoi People’s Committee, at VND4,000 ($0.19) per square metre.

Keangnam claimed the VND4,000 per square metre management fee applied to normal high-rise buildings, while Keangnam Hanoi Landmark tower had the most modern facilities and advanced technologies so it followed the fee had to be higher.

Tran Hop Dung, Hanoi Construction Department’s chief of Economic Management Division, said the department was collecting opinions from high-rise apartment residents to have database to set up these fees.

“The new service fees will be based on the reality of the market and negotiated with the local residents,” Dung said. However, Dung said the new level would be the minimum level for mid-range projects only. For other high-end projects the final fees could be decided through negotiations between developers and the resident’s representative board.

“The developer will have to apply the fees whenever 50 per cent or more of residents agreed with the proposed fees,” Dung said.