The legal, oil and gas sectors experienced a number of new tenants’ setting up operations and seeking office accommodation.

After consecutive quarters of decline, Ho Chi Minh City’s office for lease market has seen signs of recovery in short term with a stable demand for Grade A space and rental levels and a slight increasing of Grade B rents. 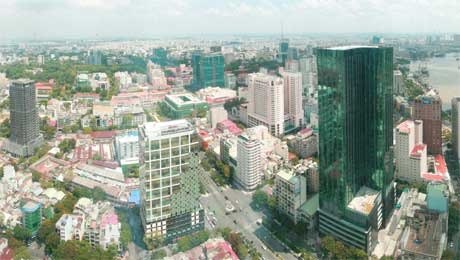 CBRE Vietnam’s director of office leasing department Greg Ohan said: “Even though demand for office space has softened in the second and third quarters, by applying flexible and effective leasing strategies, developers of key office buildings in Ho Chi Minh City can be relieved in a moment as occupancy rates in their developments are higher and higher and the downtrend of rents slowed.”

According to the latest report of CBRE, at the end of this third quarter, the average Grade A asking rents in the city were dropping slightly to $30.56 per square metre per month, showing little overall deviation from average rental levels experienced in previous quarters.

With rental levels at record lows, notably the domestic Grade B market took the opportunity to relocate from older buildings citing obvious upgrade possibilities. As a result, Grade B rents rose slightly off the back of limited supply and strengthening demand for cost-conscious tenants.

The report also recognized that while foreign direct investment for the first half of 2012 was almost 27 per cent lower year on year and overall demand for office space softened during the third quarter 2012, sector specific growth fueled new occupancies.

“Office occupiers serving the growing domestic market already in operation and expanding their operations significantly grow. This was most prominent in the pharmaceutical, fast moving consumer goods, logistics and electronics sectors.”

As the result, many Grade A and B buildings have successfully secured tenants. Some key buildings such Diamond Plaza, Me Linh Point Tower, A&B Tower, Green Power ad Centre Point were 100 per cent filled up.

A representative from Bitexco Group, developer of the 68-story Bitexco Financial Tower project, did not hide its ambition to raise its rent after its occupancy rate reaches to 80 per cent. At this time, the tower has an occupancy of 65 per cent for its office space.

However, the stability in the market is not expected to last for a long time. “All signs are showing the office market at a potential bottom at least through to early 2013,” said Ohan.

The factors impacting on stability were the next wave of Grade A supply, growth from domestic occupier expansion upgrading and global economic uncertainty due to the ongoing sovereign debt crisis in Europe and territorial disputes between China and Japan.

According to CBRE’s third quarter report, in addition to the recently opened President Place office building on Nguyen Du street, there are more than 45,000 square metres office area from delayed projects such Le Meridian, Times Square, Saigon One Tower and several office for lease building as Lim Tower and HMTC building are waiting to be poured into the market from now to the end of 2013./.