Foreign developers can be expected to once again dominate the real estate transaction market in 2013, industry insiders claim. 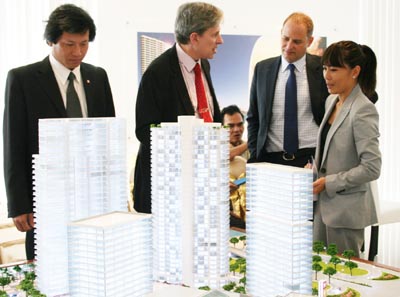 Le Chi Hieu, chairman of the Thu Duc House Development, said that 2013 would be a great year for foreign developers.

“As far as I know many foreigners are eyeing distressed projects and they are approaching current developers in order to find opportunities to take over,” Hieu said.

Meanwhile, in the first quarter of 2013, the continuing slump in the property market has forced developers to sell unfinished projects to survive. Merger and acquisition (M&A) deals can benefit both the sellers, who can finally get a major portion of their money back, and buyers who do not have to go through the rigmarole of applying for licences and acquiring land.

Outstanding examples include the Dat Xanh Real Estate Construction and Service Company’s purchase of a 2,000 unit project from the Saigon General Service company, with the cost of VND1,200 billion ($57 million). Located in Go Vap district of Ho Chi Minh City, the project consists of four blocks on 3.6 hectares.

Also in Ho Chi Minh City, Binh Chanh Construction and Investment just finished its transaction in Nhat Lan apartment building, to the new investor of A Chau Danh Khoi Real Estate Company. In the north VinaLand fund, under VinaCapital, has successfully transacted 65 per cent of an office building in Hanoi’s 30 Nguyen Du street, worth $3.3 million.

Such deals illustrate a market that is creating hard times for financially weak players. For some developer burdened with a bad debt and unsold units, a merger and acquisition (M&A) strategy is the best way for them to restructuring their portfolios in order to survive.