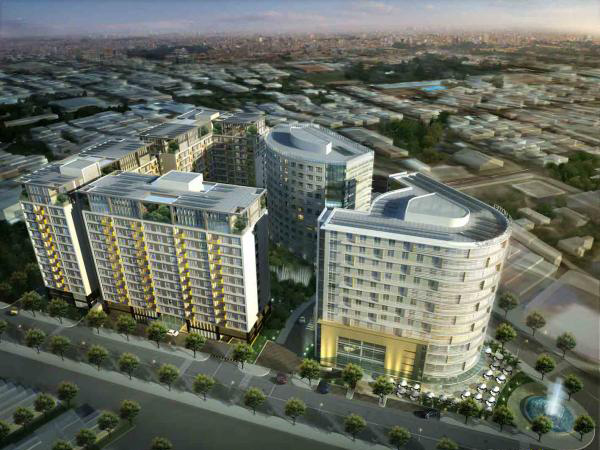 The plaza project span on 1.6 hectares next to Tan Son Nhat International Airport, and is less than 30 minutes to the city’s core business district.

It is also in a close proximity to other retail centres and greenery parks such as Hoang Van Thu Park and Gia Dinh Park.

Inside, Saigon Airport Plaza offers a full range of facilities such as a well-equipped gym club, outdoor swimming pools separately for adults and children, a Jacuzzi, spa, garden café and restaurants overlooking an impressive water-show fountain at its heart.

The project’s second phase will be for the construction of four-star Star City Airport Hotel with 240 rooms. The W-shaped hotel will offer connect-to- airport services such as pick-up at the domestic and international terminals, five-minute shuttle bus, and flight check in services.

The project was broke ground in September 2010, and its total investment is $100 million, according to its developer Viet Lien A-Phu Hung Gia, an arm of the SSG Group.

SSG is the developer of Saigon Pearl in Binh Thanh district and Thao Dien Pearl in District 2. Both are home to diplomatic residences and foreign business executives.