A number of obstacles need to be removed to accelerate the disbursement of a $1.4 billion government preferential credit package to low-income homebuyers and corporate customers developing social housing projects.

According to a source from state giant Vietcombank’s (VCB) Ho Chi Minh City branch, it just appraised 24 loans for individual customers valued at $895,000, of which $514,000 has been disbursed. No corporate customers have got loans under this credit package from the branch. 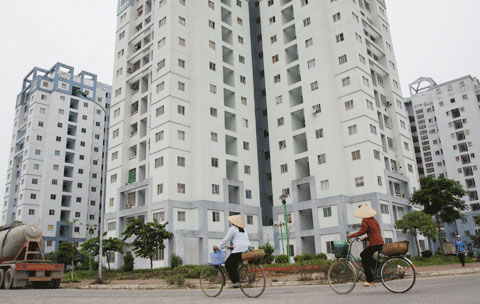 Housing for low-income earners has been a prevalent issue in Vietnam over recent years.

Also hindering the credit package is that to be eligible people need to prove that they have no property ownership and get this signed off on by their local communal and ward authorities, who have been tentative in vouching for applicants.

Another problem is that notaries have not signed off on the homes as asset collateral for the loan. Banks are therefore worried about credit defaults.

The reasons above are why only $45 million of the $1.4 billion programme has thus far been disbursed nationwide, after half a year running. In the southern hub only a million has been released, and solely to individual applicants.

Minh said that the credit package was using future houses and/or properties as collateral for people to access preferential loans. Many notaries are refusing to give homebuyers the necessary paperwork as they say under Housing Law’s Clause 91 home loans first need housing certificates.

Another issue is that low income borrowers are finding it difficult to prove they will have a stable income necessary for repayment.

Deputy chairman of the Ho Chi Minh City Labour Federation Nguyen Viet Cuong said averaged workers’ monthly income at around $140-$190 makes the principal plus interest of a 10-year loan, even at a preferential rate of 6 per cent per year, very difficult to pay.

Regarding corporate customers, deputy head of Transaction Bureau II under the Bank for Investment and Development of Vietnam (BIDV) Pham The Nguyen said businesses would be eager to join the credit programme if the lending conditions changed.

Current regulations require that programme participants first set aside a land fund to ensure construction deadlines are met and records must be sent to the Ministry of Construction for approval before banks will release funds.

“As of now, only one of nine firms supposedly involved in the programme has records sent to the MoC,” said Nguyen.