In 1959 a monumental ‘Temple of Spirit’, as named by Guggenheim’s art advisor, Hilla Rebay, was born in the Solomon Guggenheim Museum, New York. Almost half a century later the Guggenheim is nearing a rebirth in the restoration of its exterior by architects Wank Adams Slavin Associates (WASA). 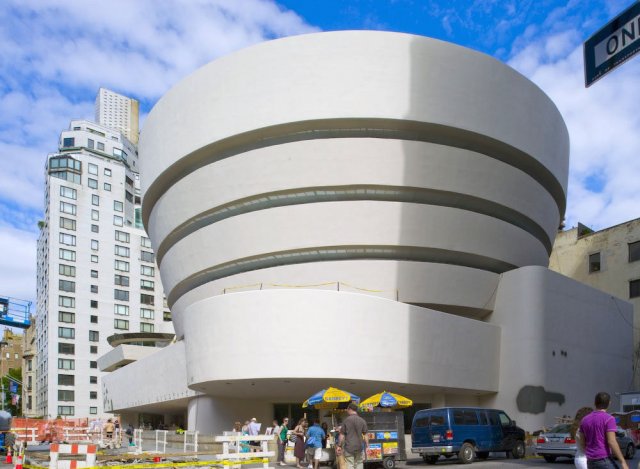 The original iconic building was designed by Frank Lloyd Wright with no joints, a circular entity free from the ties of structural boundaries. But over time it is this carefree intention which has encountered the need to renovate the exterior after expansion and contraction have taken their toll on the concrete encasement. WASA has been working on the restoration which includes the retrofit and analysis of the energy efficiency of windows and skylights in the building as well as sidewalk replacement.

As the concrete is being poured for the final sidewalk replacements the building has taken form and the Guggenheim is effectively restored. The levels of circular concrete exterior offer the Museum a distinctive perspective in bustling Manhattan and encourage the eye upward. The Museum remained open during its semi-centennial renovation but soon the building can reopen as a whole, free, once again from the constraints of structural boundaries.

To learn more about the external renovation including words from Zaha Hadid click to hear the podcast generated by Antenna Audio for the Guggenheim Museum.