Old, but very poetic… the communal buildings (in Vietnamese, nhà tập thể), which have reappeared through the reliefs and sophisticated drawings of Nguyễn Thế Sơn and Trần Hậu Yên Thế, have greatly impressed the public in Hà Nội since their exhibition opened some days ago. 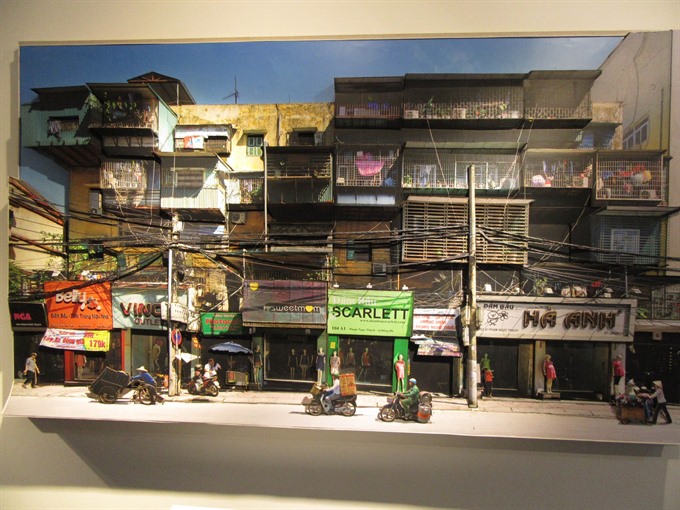 The two artists, who are both teachers at the Việt Nam University of Fine Arts, have shown the public the city of Hanoi like a living museum, which preserves memories of the past and the rhythms of the present.

All residents of Hà Nội will have seen these communal buildings at least once. However, it is unlikely that many have taken time to stop and watch the living buildings that are all around us today, yet which tomorrow may disappear without a trace.

The exhibition is called Changing Faces (Bottom and Face).

Following a long-term series on "The changing city landscape in the transitional period", this exhibition is a further addition to the two artists existing research on a very distinctive face of the city today – that is the ‘Nhà tập thể’.

These Soviet style apartment buildings first appeared in Hà Nội in the 60s. They are often 3-5 storey apartment blocks.

Sơn and Thế themselves lived for years in these communal houses. The two artists have preserved many memories of those years. Communal houses mean to them the common yards full of children playing and the families spending time together to make chưng cake for Lunar New Year. But life has changed, and they are afraid that the relationships between people will likewise change with the times.

The nhà tập thể when they first appeared in Việt Nam became a symbolic representation of modern life, with all necessities grounded in one closed space – something rather ‘luxurious’ at a time when people were already discontent with the many ‘involuntary’ shared accommodations of the ‘Nhà Tây’ (French villas) or ‘nhà ống Phố Cổ’ (tube houses in the Old Quarter).

This model of housing has lasted for over 50 years with various transformations, both in terms of façade and structure, according to the changes made in city’s development and planning. Tracing the ‘face’ of the ‘nhà tập thể’ nowadays, there are layers of ‘creative’ marks, which demonstrate the adaptation of the local people through the decades.

Communal housing represents an important page in the history of housing in Việt Nam.

The metamorphoses of social housing under the incessant action of the occupants to fit their needs testify to the tremendous “getting by” spirit of the Vietnamese people.

“This model of communal houses first appeared in France, that’s why we are exhibiting our works at the French Cultural Centre,” explained Sơn.

“We simply want to testify to the poetry of communal housing and document this form of housing and lifestyle that is gradually disappearing from the urban landscape,” he said. 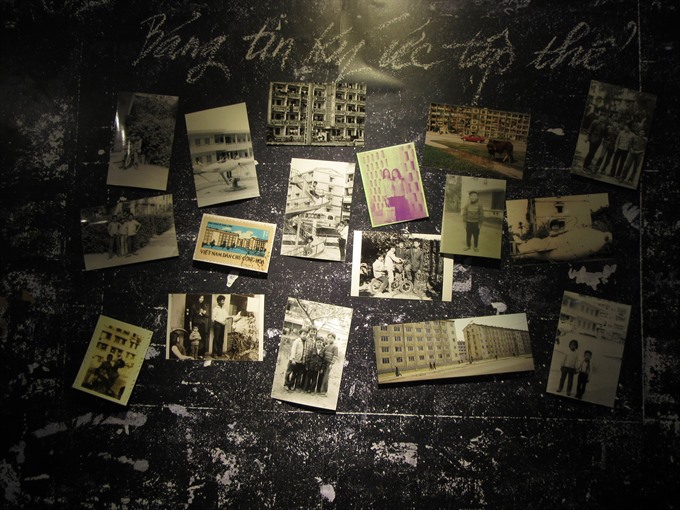 To make his works alive, Sơn took pictures then created 3D reliefs with printed pictures that were pasted onto a solid backing.

The public can also see photographs of these apartment buildings with the “tiger cages” that residents build to extend their living spaces.

At the show, two old crushed windows that Sơn brought from the Văn Chương apartment building are also on display. He has installed a blackboard with photos of happy families living in communal houses that he has collected.

The two artists spent a year preparing this exhibition. They researched, took pictures of communal houses and interviewed the people living there.

Those social houses face the risk of disappearing as modern high-rise apartments have gradually mushroomed in the city. But Thế is optimistic.

“In some countries, for example Russia, people preserve some typical social houses like a living museum to develop tourism. And Việt Nam could do that as well,” he said. 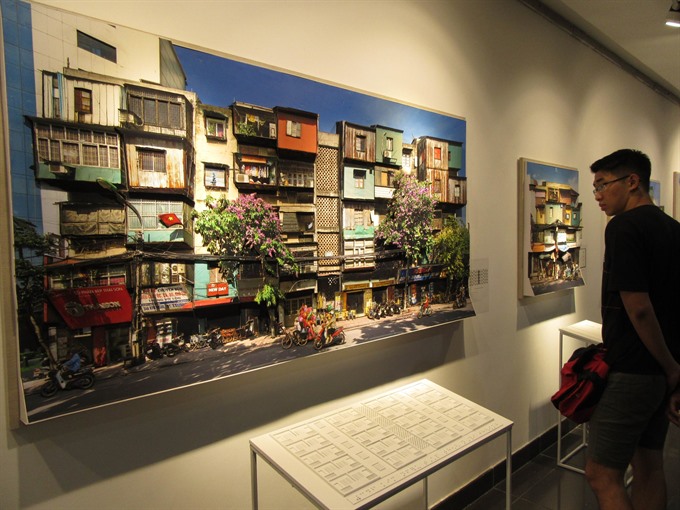 A gift for the visually impaired

Different to many other exhibits, this exhibit attracted quite a number of visually impaired visitors.

The idea came to him when he found out about the life of blind guitarist Văn Vựợng through a documentary film some years ago. Vượng lived in an old apartment and spent his time singing and playing music. To achieve this technique, Thế spent half a year studying Braille.

“It’s the first time that I have brought my son to a visual exhibition that is not only for sighted people, but also for those with visual impairments. I want to say thank to the artists,” said Mai Ngọc Linh, while watching his son joyfully touch the drawings in Braille to imagine the houses.